Coming to America - Home of the Brave?

Even on maps of the old world, Florida has never been part of the West Indies – it has a strong Caribbean influence and a significant population of expats but it sits squarely in the United States of America. The Miami area is home to the Dolphins, Marlins and the NBA Champion Miami Heat, but for the second time it will play host to international T20 cricket in Broward County, Lauderhill. New Zealand returns after its initial foray in 2010 - they will be joined by a West Indian side who, given the issues with the game in their collection of tiny nations, would likely be better served playing at home as opposed to trying to grow the game in an Associate nation.

Twenty20 is a format Dan enjoys and the opportunity to be part of a team which competes at a world event is enticing for him. He has been encouraged by his team-mates, coaching staff and others at NZC. And we are thrilled to have him in the mix. He will offer a lot to the side.
National Selection Manager Kim Littlejohn on the return of Daniel Vettori 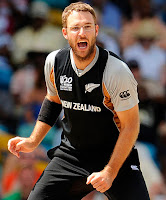 In a month when Kevin Pietersen announced his retirement from all limited overs international cricket, Daniel Vettori’s decision to come out of retirement and make himself available for New Zealand selection for the World Cup T20 tournament in Sri Lanka, whilst showing his worth to his side, illustrates the difference in riches between cricket’s glitterati and the second tier nations.

By the Buddha’s Bride

Who better to provide an insight into the mind of a cricket tragic than those who have to live with one? After much coercion the Bride/her indoors/one of the most tolerant women I’ve ever met, agreed to pen a short piece for Donning the whites. Enjoy – and welcome to a little slice of the life of a cricketing Buddha.


I am the Bride, as I am (affectionately?) referred to in this blog. I don't pretend to be an expert on the game DH (Dear Husband) loves so much, I am useless when it comes to statistics and I can't recall the ins and outs of certain games. I. Just. Like. It. That's all.

I can’t put my finger on why I like the game - I just do. It’s certainly not because of all the gorgeous hunks and their six packs (oh whoops, that’s rugby), although I do have a bit of a thing for Jesse Ryder. Maybe it’s because he reminds me of DH – on the cuddly side and doesn’t give a s@#t what people think. It’s got to be that it’s a thinking person’s game – there is so much more to it than going out on the pitch and having a bash. Although that’s fun too.

Read more »
Posted by A cricketing Buddha at 9:08 PM 2 comments:

By @lemayol
﻿﻿
Variety is the spice of life – sometimes puha needs to take a backseat to a spoonful of Senf. This week my German mate talks about her love of the great game and following cricket in a country where it doesn’t even rate a mention.


Cricket isn't that big in Germany. I'm sure there are people who have all kinds of fancy numbers at the ready and could tell you exactly how not "that big" cricket really is, but even without those numbers I can safely say that it thankfully still ranks above dry swimming and sitting shot put, but far behind our Volkssport football, cycling, swimming or the ever so popular winter sports. Most active cricketers in this country are either British soldiers stationed here or originally hail from the subcontinent, with cricket automatically being part of their lives despite the onmipresence of football and co.

Read more »
Posted by A cricketing Buddha at 8:42 PM No comments:

Why blog? Why not?

Blogging is new to me – in honesty I thought it was for those who live under the stairs or in their parents’ basement. That’s not meant to offend anyone – I live in New Zealand; we actually talk to each other here, usually over a beer at a barbeque, and solve the most perplexing of cricket questions - for a night at least. I had no idea this other world existed – I was under the misguided impression that all reasonable cricketing comment existed only via traditional media.

A little under six months ago I finally took the plunge – a mate of mine had just taken a trip to the sub-continent and I’d found her blog intriguing – not because of the countries she visited, as interesting as they were, but because it gave me an insight into her; what made her tick, what was really important in her life and what actually ran through her head (kudos, Becks). In that time I’ve penned just over 30 posts and had a shade over 10,000 hits (thanks Mum and Mrs Buddha) – it would have been just enjoyable had I only written a handful of comment pieces read by a couple of hundred people.

After a great deal of thought and deliberation, I am today announcing my retirement from international one-day cricket. I am immensely proud of my achievements in the one-day game and still wish to be considered for selection for England in Test cricket.
Kevin Pietersen, 31 May 2012


The ECB’s Hugh Morris was “disappointed”, at least that was his public sentiment – privately he may well be poking pins into a voodoo doll with a penchant for shades and a love of biltong. Michael Vaughan, in The Telegraph, proclaimed that “when I first heard the news on Thursday my gut reaction was he should never play again and kick him out the team”. Fans, it seems, in a Twitter straw poll at least, are divided between dissecting the perceived short-sighted nature of the ECB’s stance and venting their vitriol at the IPL for ruining our great game – or a combination of the two.

Are there any winners? I can think of a couple of potential ones in Australia if only strike action is averted.

Read more »
Posted by A cricketing Buddha at 8:29 PM 4 comments: