The T20 debate: Every cloud has a silver lining

If you haven't already, have a read of the affirmative side of the debate – Blame T20, for everything?! – there are two sides to every argument.


Negative – everything in moderation:
As it was pointed out by the affirmative, T20 is having an effect on international cricket – but is it necessarily a negative one? If its evils were so divisive and detrimental to our great game wouldn’t cricket’s shortest format have died out before it even got started? It hasn’t, and that in itself holds the key – the simple principles of supply and demand mean the format is flourishing.

At its base, sport is about competition and entertainment. Competition drives players, entertainment attracts fans. In a modern world where entertainment choices are greater than ever before, has T20 filled a void that was missing in our great game? For the most staid of traditionalists T20 may offer very little – it’s seen as the antithesis of what they believe cricket is, if only because of a closed mind. But for those on the fringes, cricket is seen in a light that’s never shone on an outfield before.

One of the most regularly discussed, or argued, cricketing topics is the effect T20 has had on our great game – people seem divided into the two opposing camps - there is often little middle ground.

With the World T20 in Sri Lanka in full swing, what better time to consider the evils of the shortest form of our great game – perceived, at least.  I’m something of a traditionalist and would happily sustain myself on a diet of test cricket, but I’m also a realist – in a society that is now overflowing with entertainment choices, cricket has had to look outside its standard boundaries and expand its horizons.

If one were to listen to talk back radio, or read comments through Twitter, Facebook or any number of cricketing mediums it would be easy to think that everything wrong with our game started and finished with T20 – there seems a lack of balance in most opinion. Vocal traditionalists appear unable to see beyond the realm of first class cricket, whilst those drawn to our great game through the T20 vehicle are often lambasted for their love of the devil’s game.

Read more »
Posted by A cricketing Buddha at 9:52 PM 5 comments:

A is for Ambrose

Cricket is an in-depth game, it’s full of idiosyncrasies and nuances unlike any other sporting theatre. We are all drawn to the great game for different reasons – the individual battles, the statistics, the history – the list is endless.

My cricketing A-Z isn’t about detailing the basics – that path is well-trodden. It’s written for things I love in cricket - those that have made an impact on me, that draw me to the game. They may not be the played in the “V” but they are a part of what makes cricket sing for me. It’s unlikely they’ll match your list but they’ll offer a trip down cricket’s memory lane, and hopefully some debate – there’s little better than healthy discussion.

Please excuse the strong New Zealand and West Indian bias – they shaped my love of our great game.

Over the coming weeks (read: months) I’ll work my way from A to Z, and given more time to reflect I’ll no doubt have to back track and make some additions, but here’s a start.

Read more »
Posted by A cricketing Buddha at 9:12 PM No comments: 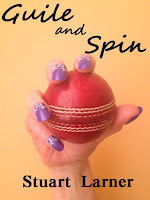 It’s been close to 20 years since I wrote a book review, and dry essays about Shakespearean dramas written for insular school masters don’t qualify me to critique a novel built around our great game. I’ve read more cricketing (auto) biographies than one man should, so why not a work of fiction – Stuart Larner’s Guile and Spin is infinitely more readable, and believable, than most of them and doesn’t require the contrived controversy that mars current cricket books.

Managing a dilapidated council sports and recreation centre while continuing to coach tennis as a side venture, Jeremy Freeman fills the role of the reluctant hero. Having not played cricket since his schooldays, Jeremy has little more than a passing interest in our great game and but for the influence of an attractive female cricketer, Claire Spedman, the story would likely have died before it started.

7/64 on a green seamer at the start of a New Zealand summer would be a fine haul – to achieve it against India on the sub-continent is almost without peer. The extraordinary effort of Tim Southee made for riveting test cricket, albeit a hard-fought loss, and helped dull the pain of an inept New Zealand struggle in the first test. Will it allow him to cast aside the potential tag that has threatened to hang him for the past four years?

A baby-faced Tim Southee announced his arrival on the international scene with 5/55 against England on test debut in Napier – four years and 18 tests later, a more mature 23 year old has finally shown a return on the potential that had started to weigh him down.

Having got his break for Northern Districts as an 18 year old, Southee made the step up to the international arena in 12 short months, but his appearances at test level have been sporadic and often underwhelming. Like Vettori before him, Southee has grown up, both personally and in a cricket sense, almost wholly at an international level - developing in the spotlight is never easy, doing it as an impressionable young man can be a recipe fraught with danger.