While I enjoy penning my thoughts on any range of cricket topics, I love hearing the opinions and comment of those with far more 'skin in the game' than I. Let's be honest - I'm a rank amateur, but on occasion I get to have a chat with those with a little (read: a lot) more clout - there's some good lads, and ladies, out there who are willing to give up their time and provide candid cricketing comment without going through the 'established' channels - thanks to all of you.

Over time I'll try to get more At the wicket interviews with a cricketing Buddha but here's a couple of gems to kick things off. 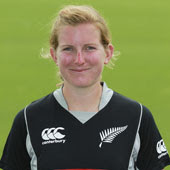 22 year old Morna Nielsen’s game has undergone a major transformation. Entering New Zealand’s domestic game as a wide-eyed 17 year old medium pacer, she is now carving out a niche as one of New Zealand’s premier limited overs’ bowlers – as a left arm spinner.

Morna talks to a cricketing Buddha about her start in the game, personal milestones versus team achievements, and basing herself across two different islands. She also wades into the debate of test cricket and T20 – not really, but they tell me that controversy sells…

In the first interview featured on Donning the whites, George Dobell was kind enough to answer a few questions from a cricketing Buddha.

He talks to a cricketing Buddha about his start in the business, an affinity with the Windies and gives a reasoned account of a number of the issues facing our great game. He also answers the age old question of the origin of the humble pavlova.

On his final evening in Wellington prior to returning to his wife and young daughter in Matlock he caught up for a chat with a cricketing Buddha. With the ability to talk more than Matt Hayden sledged I’ve had to split the interview into two parts – his career in the middle and life after cricket.

In Part One we cover off his days as an international cricketer – from what he wrote inside his treasured black cap to his eternal thanks to the Sydney Morning Herald. Iain discusses playing at the Home of Cricket and his cricketing home, and opens about the hypocrisy of Kolpak and the ECB.

In the second part of a cricketing Buddha’s interview with cult figure Iain O’Brien we discuss life after a decade long playing career – Iain mixes light hearted banter with the some great cricketing insight. He talks openly about his battles with depression, spot-fixing, Jesse Ryder and his portrayal as a young Ron Snowden. He is candid about his dealings with the media and how it is now sitting on the other side of the fence.

In a Donning the whites exclusive Iain puts the rumours of a career in nude modelling to bed, though he leaves the door open for his own underwear range.